In this article, I’ll share with you some of my experiences doing drone photography with my new flying camera. I learned on a DJI Mavic Pro, but the principles here apply to any newer camera drone as well. You’ll see how learning to use and fly a drone can help you improve all your photography as well. Here are some of the lessons I’ve learned:

Learn to fly before you learn to shoot

This means finding an open space and learning the controls well so don’t have to consciously think about every lever and button and what it does. You’ll have plenty of time for making photos later. Get the feel of the aircraft now. 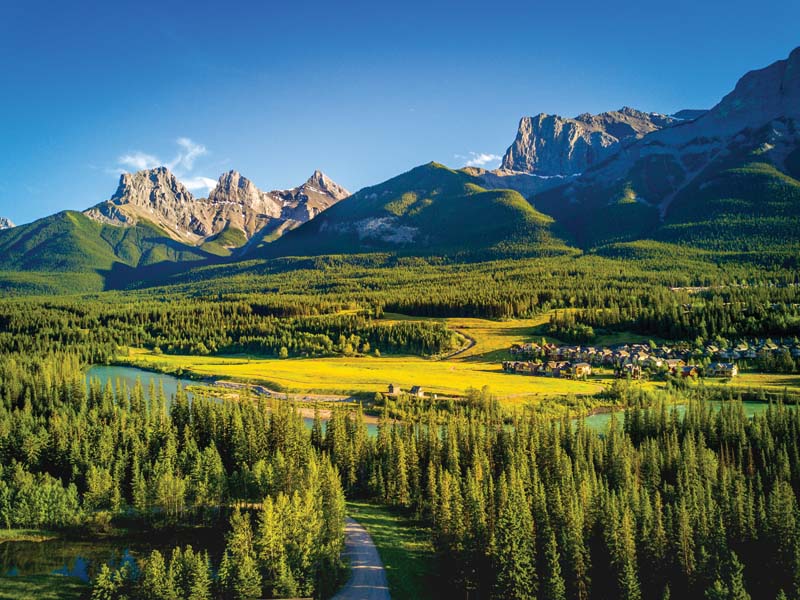 Visualize before you take off

On the Mavic Pro, you get about 26 minutes of flying time on each battery (so definitely consider buying extras). Because of that, try to visualize your shots before you take off so you’re not spending that precious 26 minutes of battery life just flying around aimlessly.

You must realize, however, that when you first start working with a drone, everything will look different from above. Don’t worry. As you get more experienced, you’ll learn how to “read” a scene better and you’ll spend less time searching and more time setting up the shots you want.

Consider photographing in RAW (the camera’s native format for images as opposed to JPEGs) if you know how to process them in a program like Lightroom. For me, it is too hard to see all the lighting nuances on my phone screen. RAW gives me more latitude than JPEGs for fixing later.

Consider bracketing your shots as well (if your drone has that feature) to allow for even greater flexibility with exposure.

DJI’s RAW files look bad right out of the camera. But pump up the Blacks (for contrast) and increase the Vibrancy and the images can be stunning. Overall, the camera and the Mavic Pro aircraft are surprisingly good.

Learn the focus and metering buttons

Switching between the focus and metering buttons is easy once you locate them on the controller. Both are extremely useful since you get strong contrasts from the air.

At first, I blew out a lot of highlights. When I learned to meter on the right areas of the scene, my photos improved dramatically. Start by sticking with the auto functions of the camera but quickly learn and use the other focus and metering functions available.

Consider getting a polarizer

A polarizing filter reduces glare, but you can’t just twist it like a circular polarizer on your DSLR (it’s a bit out of reach when the drone is 300 feet above you). You can only adjust it by changing the angle of the aircraft which isn’t always helpful when composing a particular shot.

But the polarizer does protect the lens and makes the sky pop in your images. My next purchase will be some ND (Neutral Density) filters to knock down even more of the light and glare. Because you’re shooting from above, you’ll experience new angles of light that you don’t usually get with traditional photography.

There’s a parallax phenomenon that takes time to understand. Compare the photos of two different bridges. In the first (above), I wasn’t directly over the bridge and the photo isn’t as good as the second one where I took the time to turn the drone sideways while rotating it at the same time to get the shot lined up perfectly.

It seems simple until you try it. But with practice, you’ll learn little tricks on how to maneuver your drone to get the shot you want. And the image stabilization, at least in my Mavic Pro, worked better than expected. Thus, if you can line up the shot, you’ll likely get a good image. 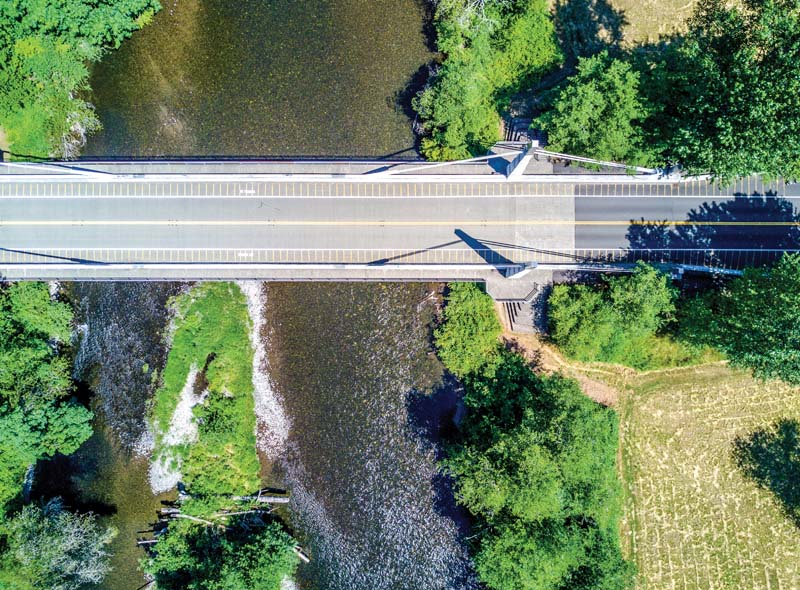 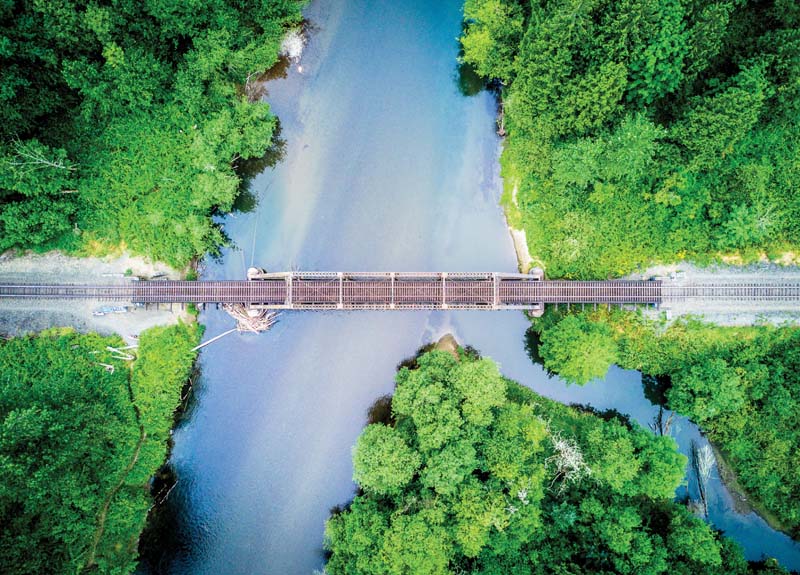 As noted, I’ve held off on shooting more than quick snippets of video. Why? Because with still photography, the aircraft is essentially a floating platform that I can nudge into position. If my turns are awkward, it doesn’t matter.

But when you’re shooting video, flying is everything (or a whole lot). You want your aircraft’s movements to flow smoothly. In my first month of periodic flying, I just wasn’t experienced enough for video. But I did ask my friend Randy (who’s had a drone about as long as I have) about his experience with video.

He noted that a) videos are smoother when you lower the frame per second rate, and b) it’s far better to keep the focus on a single element rather than panning around to capture everything at once.

Learn how to avoid obstacles

In the early stages, you’ll likely be a bit freaked out by trees or other objects that seem to reach out toward your drone. Personally, I haven’t yet gotten close enough for the aircraft to employ its obstacle avoidance procedures.

Randy tested the sensors out by flying his aircraft directly at him. He figured that unlike flying into a tree, he could move out of the way if the sensors failed. As it turns out, they worked great. The aircraft stopped a few feet before him.

You still want to fly carefully, but it is nice to know you have the sensors working for you. 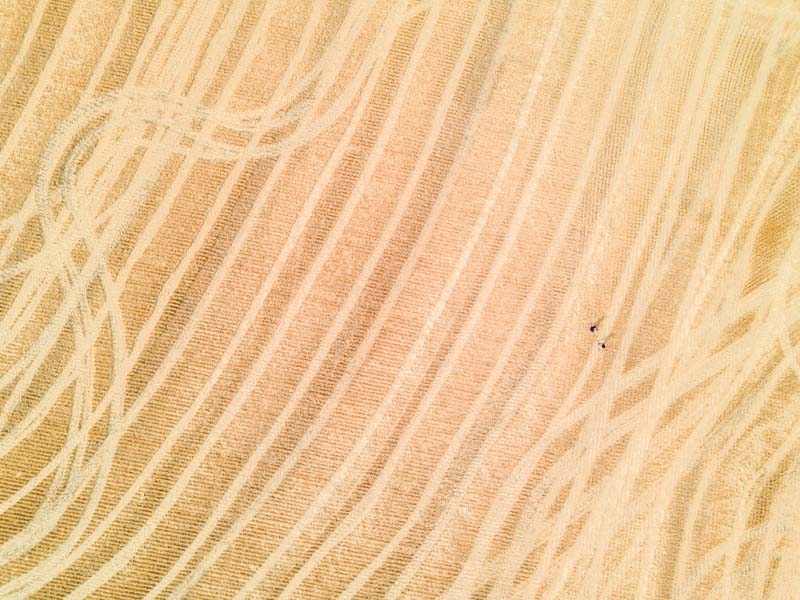 Recognize the limitations of where you can fly

There are restrictions where you can fly your drone (no national parks, no crowded areas, no flying near airports, etc.) but there are still vast regions you can explore by air that you can’t when tied to the ground. Also, scenes that look boring from the ground (a wheat field, for example), take on new possibilities when viewed from above. You just must rethink what makes for a great image. 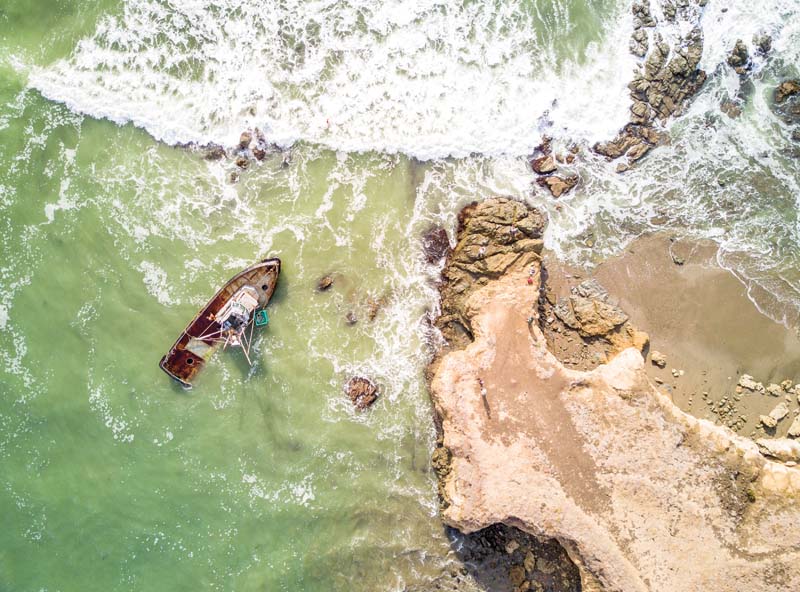 Shots taken directly overhead will likely be more intriguing to you when you first start. Remember when Instagram was first getting going? Everyone took photos of their feet because they were more enamored with the filters on Instagram than in taking great photos.

Compare, for example, the two shots of the wrecked fishing boats. Which is better? It’s all a matter of taste, but now you have options. 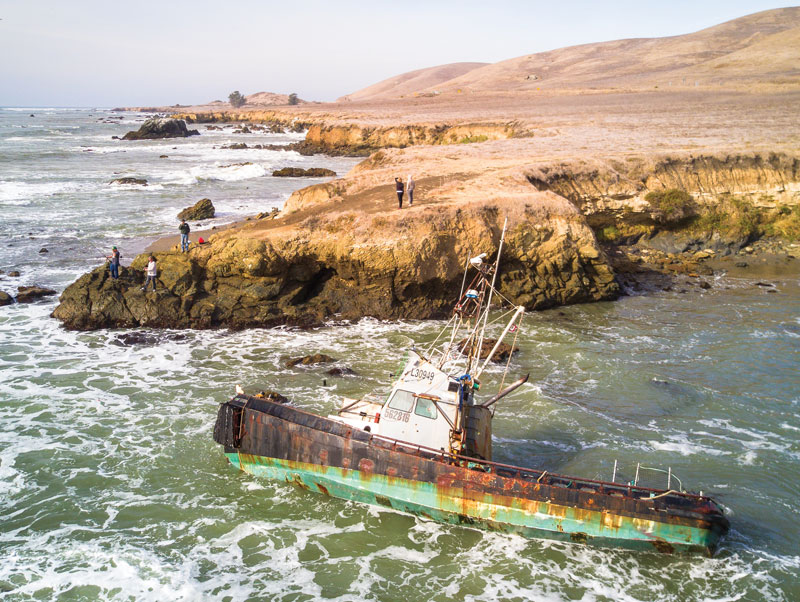 Learn to shoot at angles

Angled images are tougher to shoot at just the right height, distance, and direction than direct overhead ones. But they don’t scream “DRONE SHOT” the way some higher-altitude-direct-overhead photos do.

Also, a benefit of angled shots is that you can isolate your subject from distracting foreground or background items. For example, in the shot of the ruined church above, using a drone allowed me to avoid several unwanted foreground elements.

Back to direct overhead shots, another benefit is that they can help you think differently about photography. You may, in fact, start perceiving the world more from a design perspective, being more aware of line, texture, patterns, and colors. 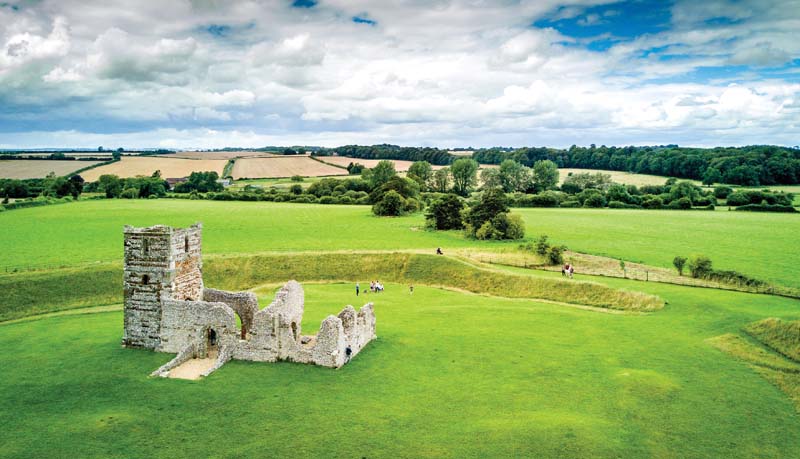 It may take time to master drone photography. But along the way, you’ll likely capture some surprising and astounding images. And best of all, you may become a better overall photographer as a result.

THE BASICS
How long it will take you to learn to fly your drone depends in part on the drone you get. With the DJI Mavic Pro, I spent time reading the manual (somewhat helpful), watching the DJI videos (more helpful) and then watching other people’s YouTube videos (super helpful).

Even if you’re a “forget the instructions, let’s get going” type of person, spend time watching some of these videos. It will be worth the effort since not everything about your drone, especially from a photography perspective, will be intuitive. Besides, you can do it while your batteries are charging.

On most drones, the controller connects to your smartphone. Your phone’s screen becomes your remote viewfinder. Let’s state what may seem obvious but isn’t if you’ve never owned a drone: You need a smartphone to fly most drones for photography purposes. It took me three days of trying to get the detested DJI app (just read the app reviews and you’ll see what I mean) to work only to find that it was incompatible with my older phone. I switched to my wife’s phone and voila, everything suddenly worked.

If your drone doesn’t connect immediately once you download the app, it’s likely the app/phone combo. My advice is to focus on solving the phone/app connection first.

FIRST FLIGHTS
The first time I flew the drone, I freaked out seeing it go up so high. The second time, not so much. The third time, I stopped looking at the aircraft (which, DJI reminds you repeatedly, is the proper name for the device, not a drone. Drones shoot missiles and spy on terrorists. Aircraft are, well, aircraft, I guess, even if this one can fold up and fit in a purse). Instead, I just watched the screen. That is much easier. In short, while you want to always have your drone in visual range so you’re aware of hazards (that’s the law in most areas), concentrate mostly on your screen and you’ll gain confidence in flying it faster.

A NEW PERSPECTIVE
For most photographers, a good quality drone is a luxury, not a necessity. But its greatest value isn’t just in allowing you to take photos you cannot without it. It’s helping you to make better photos even when you’re not using it simply because it will cause you to rethink how you see a scene and thus make a photo.

When I was in college, I played on the school’s tennis team. Part of the training included a class on how to teach others to play the game. For the month that the class lasted, each participant had to play using his or her non-dominant hand. Not easy.

Shooting with the drone/aircraft is similar. Because it is initially so unfamiliar, it will rewire how your brain thinks about the subject you’re photographing and how to compose the image the best way. Without a drone, your photography will likely be two-dimensional, and you’ll probably continue shooting in the same way as you always have.

With a drone, you must factor in height and different angle possibilities. That, in turn, will affect your more terrestrial shots as well since you’ll see more possibilities than you did before. 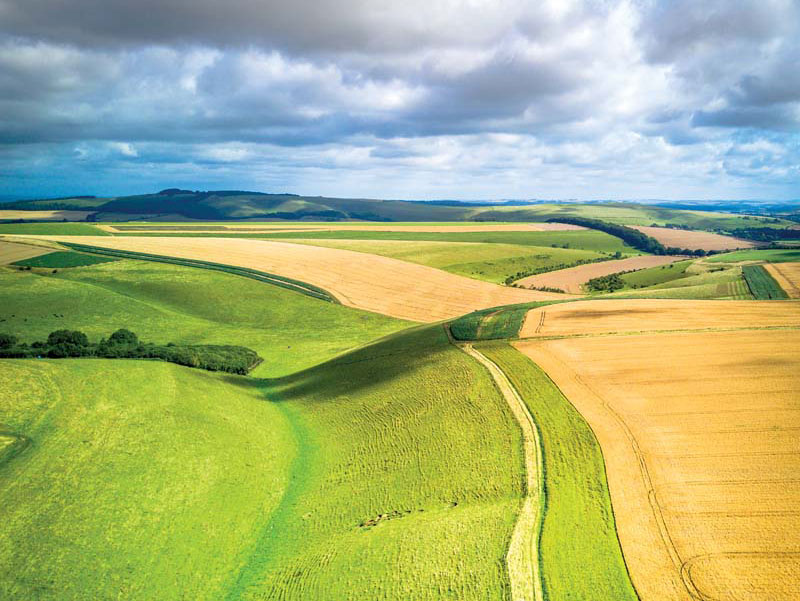 ABOUT THE AUTHOR
Stephen W. Brock is a photographer, writer, creativity aficionado, and author of “Hidden Travel: The Secret to Extraordinary Trips”. He helps people connect their outer journey (travel) with their inner longings, creative interests, and passions (such as photography). Find out more about connecting what you love with where you go at ExploreYourWorlds.com where you can get his free guides such as How to Take Awesome Travel Photographs or Everything You Need to Know to Photograph Machu Picchu. 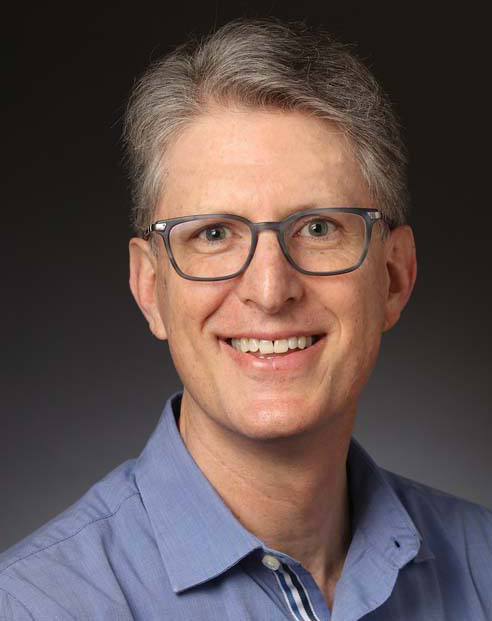 The post Getting Started in Drone Photography appeared first on RotorDrone.